Legislative Updates WVEC April 2, 2021
GREEN, Volume 31 Issue 9
Welcome to the last newsletter of the 2021 Legislative Session. We are not done yet as the final 8 days of the session promise to be critical. (The session ends at midnight on Saturday, April 10).  More
Issues: Aboveground tanks, Event, Legislation, Opportunity, Water

Newsletter article WVEC April 2, 2021
Second to Last Week at the WV Legislature
Next Saturday, April 10, is the last day of the WV Legislative Session. We are still watching quite a few bills and there are still important actions to take! Click on article to read more. More
Issues: Legislation 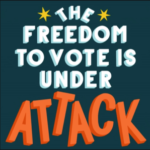 Newsletter article WV Citizens for Clean Elections April 2, 2021
Voting Access Under Attack
A bill (SB 565) that would limit access to early voting, gut automatic voter registration, and make it easier to remove voters from the registration rolls is picking up steam in the WV Legislature. The bill has already passed the Senate and is now before the House Judiciary Committee. More
Issues: Clean elections, Legislation

Legislative Updates WVEC March 26, 2021
GREEN, Volume 31 Issue 8
It’s been a crucial week at the WV Legislature and we hope you can take action on some of these important bills tomorrow or Monday (legislators will be working tomorrow). Several of them are currently before the Senate Judiciary Committee. Bills are also originating in committee so there is a lot to watch. Please keep making your calls and sending emails - thank you! More
Issues: Aboveground tanks, Legislation, Power purchase agreements, Water

Action Alerts Solar United Neighbors March 21, 2021
URGENT: Don’t let a handout to utilities raise your electric bill
House Bill 2959, which is expected to be considered on the House floor Monday and Tuesday, would make it easier for monopoly utilities to raise our electric rates without due process or oversight. These wealthy, out-of-state corporations want to put West Virginians on the hook for expensive energy generation that only the companies can own. Tell your legislators you don’t want higher electric bills and that West Virginians deserve energy freedom. More
Issues: Energy, Legislation

Newsletter article WVEC March 12, 2021
Legislative Updates, Week 5
SB404, which would modify well work permits issued by the WV Department of Environmental Protection’s Office of Oil and Gas was passed out of the House Energy Committee today and read for the first time on the floor. As mentioned earlier, the additional funds generated by this bill may be used to hire and retain additional inspectors. WVEC supports this bill and we hope to see it pass on Tuesday of next week and head to Governor Justice’s desk.  More
Issues: Legislation

Legislative Updates WVEC March 12, 2021
GREEN, Volume 31 Issue 6
Hi, everyone! We have concluded week 5 at the legislature, and are now past the half-way mark. Next week is the last week that bills can be introduced in the House and Senate. We are keeping a close eye on about 45 bills, many of which have not even made it to committee agendas, which is both good and bad. We saw two very bad bills pass the House this week, but one good bill, SB 404, made it through both chambers and is set to hit the Governor’s desk. More
Issues: Eday, Legislation, Water

Newsletter article WVEC February 19, 2021
Important information on the water quality standards rule
Fill out the action alert here to tell your House Judiciary Committee members that you oppose the weakening of our water quality standards. More
Issues: Legislation, Water
Newsletter article WVEC February 19, 2021
Join Us for Virtual E-Day – March 10!
Please join us on March 10 for this year's virtual E-Day! The event is free but Zoom registration is required. Find out more on our Facebook event page. (Suggested donation is $10.00 to support our lobby team.) More
Issues: Event, Legislation