I went to the labor rally earlier today. Speech after speech was about the need for action. Call your legislators, register to vote, vote, get your friends registered, drive your friends to the polls, get on the street, march, and rally; do anything, but do something. What inspiring words! I was so moved when they asked that people boycott Speedway Stores because workers are on strike at the Marathon facility near Ashland, that I went on to Facebook and sent that out.

This session, people who support the Environmental Council and other groups who are working for cleaner water, less pollution, better safety around chemical plants, cleaner energy production, women’s rights, childhood poverty, affordable health care and many other progressive ideas have done much of the same. And it has, in many cases worked. But we need more!

So this week I ask: Can we come together to build a progressive movement in the State of West Virginia? I want to hear your ideas, and I want to state here, right now, that I think not only can we; but that we must. I think environmentalists, labor rights advocates, and supporters of women’s rights, those who want better access to health care, and those who think that it is past time that this State lose its reputation as a place where people can be oppressed and stomped on to unite. I felt the energy at the rally today. I also felt it at the public hearing on the bill that rolls back the aboveground storage tank law from last year. We have the energy, now the question is, “How do we turn that energy into power?” Into a power that changes the direction that so many of our public officials want to take us.

I believe it can be done by action, not reaction. Let’s get together, look at a plan for not only the short term, but also take a long view. Let’s not just respond to the current issue of the day, but also look at what we want in our future. And let’s work to have the choices to bring that future to fruition. Let’s act, not just during the Legislative session (thankfully only one more week), but also all year round to build relationships with each other, to discuss, to debate respectfully, and then to act.

That approach is different from what our politicians are doing. They seem to only to react to the short term, and then count on us to forget or be distracted by the false barriers that they try to place between us. A mine explodes and kills miners and we are told “never again”. But then years later, we still don’t have the increased safety regulations that are needed to protect miners underground and in fact, the politicians are poised to reduce worker safety. The water of 300,000 people is contaminated and they say “we will make this State known for strong regulation and enforcement so we won’t face that danger again. But then, one year later, the State Legislature is ready to exempt tanks that still threaten the water supplies of many of our residents. It seems that our State “leaders” want you to think that somehow it’s courageous to face the trials and tribulations that are upon us, react to them somewhat, then just go back to business as usual. Let’s not do that. And most importantly, let’s not let our politicians get away with it.

Action, not reaction will provide us the future we need. 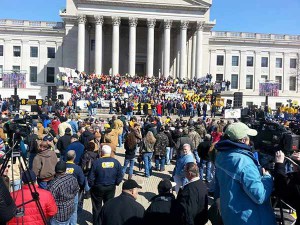