Early in the 2015 Legislative Session, the West Virginia Coal Association unveiled its 2015 Coal Legislative Program. A copy of this proposal was posted and distributed to the public by Ken Ward, Jr at the Charleston Gazette on his Coal Tattoo Blog on January 29th. A key provision in this proposal was to eliminate a 56 cent per ton tax on coal paid into the Workers’ Compensation Debt Reduction Fund.  A more detailed analysis on the Workers’ Compensation Debt Reduction Fund can be found here from Sean O’Leary at the WV Center on Budget and Policy.

On March 3, HB2675 passed the House reducing the Natural Gas Severance tax by 11 percent and the coal severance from 56 cents per ton to 50 cents per ton.  The measure has been referred to the senate finance committee and will be considered later this week.

A 2010 Report from the West Virginia Center for Budget and Policy and Downstream Strategies found that coal has a net impact on state budget of a 97 million dollar loss. While the justification for reducing the severance tax paid into the Workers’ Compensation Debt Reduction Fund was because the debt will be paid off by the end of 2016, the state and individual taxpayer would be better served diverting that tax to fix our roads, bridges, thousands of miles of impaired streams, and any other liabilities the dying coal industry has left to be fixed by the general revenue fund and the individual taxpayers.

The Legislature could have reduced the premium surcharge on workers’ compensation policies to help small businesses or reduced to the $95.4 million paid annually in personal income tax collections to the Worker’s Compensation Debt Reduction Fund while keeping coal and gas contributions the same.

Coal only got a 6 cent per ton reduction of the 56 cent per ton they wanted, but as there are no indications the industry will improve as competition for other regions and declining reserves pose increasing challenges to the industry, we can expect them coming back next year asking for even more.

The measure passed the house with a 80 to 18 vote with 18 responsible Democrats opposing the measure because the coal and gas industry got a tax cut and the everyday hardworking West Virginian didn’t. When House Finance Chairman Del. Eric Nelson was questioned by Del. Skinner, Del. Caputo, and Del. Manchin on the floor, he stated the people would not be getting a tax break this year. 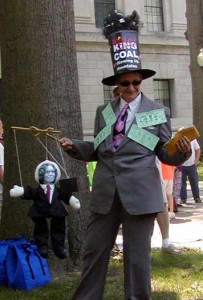