Kanawha Valley residents, small-business owners and religious leaders joined environmental advocates Friday morning in what could be a last-ditch effort to convince West Virginia lawmakers not to roll back a strong chemical tank safety law passed unanimously by the Legislature after last year’s Elk River leak and the ensuing water crisis.

Industry officials turned out in force to back the bill, with representatives of most of the state’s major trade associations and of the local operations of DuPont, Dow and Bayer all speaking out in favor of the measure during a public hearing of more than 90 minutes in the House chamber.

While some supporters depicted the legislation as a compromise bill supported by various sides that took part in Senate-organized “stakeholder” meetings, representatives of citizen groups who participated made it clear during the hearing that such comments were simply not accurate.

“The safety-net proposals we offered during the stakeholder process were largely ignored,” said Angie Rosser, executive director of the West Virginia Rivers Coalition. “This bill is really about public trust, and we can’t support a bill that weakens inspections.

”And in fact, the legislation (SB423), now pending in the House Judiciary Committee, does soften inspection requirements. Under the bill, mandated inspections by the West Virginia Department of Environmental Protection would be reduced from an annual basis to every five years and would be conducted only on tanks considered the most dangerous because of their size, contents or location near public drinking-water intakes.

Among other changes, the legislation would ease last year’s tank safety bill by exempting at least 36,000 of the tanks currently in the DEP’s 48,000-tank inventory, allowing lesser safety standards for other tanks and blocking public access to some information about hazardous materials stored near drinking-water intakes.

“It’s as if the water crisis last year never happened,” said Charleston resident Rebecca Roth, who spoke against the legislation.

Roth and other residents who lived through the weeks following the Freedom Industries chemical leak reminded lawmakers that scientists knew little about the chemicals involved, leaving residents worried about bathing young children and searching the valley for bottled water long after some political leaders had lifted a “do not use” order on the region’s water supply.

Other speakers noted that the whole episode could have been avoided with stronger rules, tougher enforcement and a more flexible local water supply system prior to the January 2014 leak.

Passage of last year’s law “strongly suggested there had been a change in the priorities and that health and safety was a significant priority,” said Paul Sheridan, a local lawyer with the group Advocates for a Safe Water System, which formed after the water crisis. Sheridan urged lawmakers to leave the new law as it is, rather than rushing for a “fix to something that isn’t broken.”

Father Brian O’Donnell, of the West Virginia Catholic Conference, said access to clean drinking water is a God-given right and urged lawmakers to act “very conservatively and cautiously” in considering any rollbacks in protections already on the books. The Rev. Jeff Allen, executive director of the West Virginia Council of Churches, also spoke against changes to last year’s law.

Sierra Club organizer Bill Price told lawmakers the bill that passed last year wasn’t a hasty, knee-jerk reaction to the Freedom leak, but a bill crafted during lengthy hearings before five committees in the House and Senate.

“There is nothing knee-jerk about last year’s bill,” Price said. “It’s only been in effect for a year. Give it a chance to work before you start messing with it.”

However, representatives of various oil and gas companies, along with both of the state’s gas industry trade groups and organizations representing manufacturers and the coal industry, described last year’s bill as having gone too far, by regulating industries and tanks that weren’t of the type or the location responsible for the water crisis.

“This bill protects the environment,” said Jan Vineyard, president of the West Virginia Oil Marketers and Grocers Association. “It will allow [the] DEP to focus on the tanks that pose the greatest risk to our drinking water.”

Leaders of some small-business groups questioned the legislation, though, saying that giving in to the demands of coal operators, gas drillers and chemical makers won’t help West Virginia diversify its economy and keep other types of job creators in the state.

“If you weaken this bill,” Gunnoe said, “you will not attract any new businesses into West Virginia.”

The current version of the bill easily passed the state Senate and has the support of DEP Secretary Randy Huffman. In the House, a more dramatic rollback of last year’s bill garnered four Democratic co-sponsors, including Minority Leader Tim Miley, D-Harrison.

House Judiciary Chairman John Shott, R-Mercer, said Friday morning that his committee will consider the Senate bill “in the next three days or so.”

The Senate bill carves a huge number of tanks out of the law by creating and defining a new term, “regulated aboveground storage tank.” The term limits the law’s coverage to larger tanks, tanks with more dangerous contents and tanks located within the “zone of critical concern,” which runs to five hours upstream from drinking-water intakes, and those tanks defined by a new term, the “zone of peripheral concern,” which goes about 10 hours upstream from water intakes.

While definitive numbers aren’t yet available, DEP officials have told lawmakers that about 5,000 tanks are located within the zone of critical concern and another 5,000 to 7,000 tanks within the zone of peripheral concern. That’s out of the roughly 48,000 tanks contained in a DEP inventory that was put together only after it was required by last year’s law.

“To say that this bill protects drinking water is like saying Colonel Sanders protects the chickens,” said Mike Plante, a local Democratic political consultant. “It doesn’t pass the smell test. We can do better than this.”

The Senate bill also would create what some observers are calling an “opt-out arrangement,” in which tank owners and operators covered by existing DEP permits for things like gas drilling or coal mining could substitute those permits for compliance with the chemical tank safety law.

Under this provision, tank owners could ask for their existing permits to be modified to include conditions pertaining to the management and control of regulated tanks. Those tank owners would then be considered in compliance with the storage tank law as long as their permit language, in combination with practices and protections already in place, are sufficient to “protect the waters of the state.”

Rob Goodwin, a lobbyist for the West Virginia Environmental Council, told lawmakers that language gives the DEP too much discretion to decide which tanks would be covered by tank-integrity standards and which would not.

This article was printed in the Charleston Gazette on Saturday, March 7.  Reprinted here by permission. 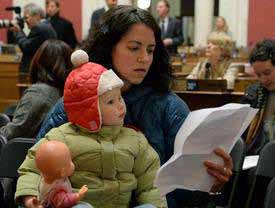