SB404, which would modify well work permits issued by the WV Department of Environmental Protection’s Office of Oil and Gas was passed out of the House Energy Committee today and read for the first time on the floor. As mentioned earlier, the additional funds generated by this bill may be used to hire and retain additional inspectors. WVEC supports this bill and we hope to see it pass on Tuesday of next week and head to Governor Justice’s desk.

HB2667, which creates a cost-savings program for state buildings regarding energy efficiency was reported out of House Energy and Manufacturing on Thursday and referred to the House Committee on Finance for further review. Even though the initial cost to the state is around $1.6 million, a representative from the Office of Energy stated that there will be cost savings to tax-payers, considering there are many energy savings measures that will pay for themselves immediately or in a couple of years. The energy audits will give an exact number of cost savings once they are completed. If you wish to contact the House Finance Committee and offer your support, call 304-340-3230 or email the Chairman at eric.householder@wvhouse.gov.

One bill of concern was introduced on Wednesday by Senators Phillips and Smith. SB616 would abolish the DEP,s Environmental Advocate. The bill was referred to the Senate Committee on Energy, Industry and Mining, on which Smith and Phillips serve as Chairman and Vice Chairman respectively. WVEC strongly opposes this piece of legislation and will work diligently to see that SB616 is not enacted this session. Please reach out to members of the Senate Energy Committee and voice your opposition.

This was a rough week for water policy. Both HB 2598 (oil and gas exemptions from Aboveground Storage Tank (AST) Act bill) and HB 2382 (formerly HB 2389, Water quality standards rule bill) passed the House this week and are now headed over to the Senate. Wednesday, on the third reading of HB 2598, Delegate Pushkin filed a petition that 750 West Virginia citizens signed to oppose allowing the exemption of oil and gas tanks from regular inspection. The bill passed, but not without a lengthy, heated debate on the floor. The sponsor of the bill, Delegate John Kelly, could not provide specific amounts of toxins that are in these tanks, but claimed that this is a “risk we are willing to take” to ensure the viability of the oil and gas industry. Several Democrats gave compelling testimonies on why this legislation is harmful for public health, even mentioning their own personal experiences from the 2014 water crisis. Many delegates reflected back on the 2014 Freedom Industries spill that left 300,000 Charleston residents without drinking water for weeks, and how the members of the House of Delegates came together in a bipartisan effort to create the AST Act to ensure this would not happen again. The AST Act has been amended many times since then, and this is the final blow with the most dangerous repercussions for drinking water. This bill heads over to the Senate and will be on the Senate Judiciary committee agenda soon. Let the Judiciary chairman (304-357-7880) and members of his committee know that you oppose this harmful legislation that will risk the safety of our drinking water.

This week was a rough fight, but we will continue the fight to stop these bills. Stay tuned for next week! 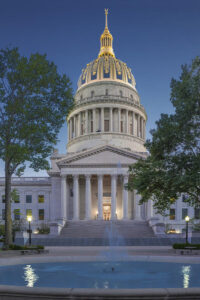