One of the West Virginia Environmental Council’s priorities this session is to see the passage of legislation that allows for a third-party solar financing vehicle called a Power Purchase Agreement (PPA). PPAs will expand access to affordable renewable energy and create jobs in West Virginia. PPAs will help our communities, businesses, tax-exempt institutions, and low-income families go solar.

We have exciting news to report today: a bill to allow PPAs was introduced this morning in the Senate! SB 611 is sponsored by Senators Trump, Smith, and Lindsay and has been single referenced to the Senate Committee on Economic Development. We hope to see it on the committee agenda in the next week or two!

All West Virginians should have the right to choose where our electricity comes from. Legalizing PPAs will help make that happen!

Stop by the WV Solar United Neighbors table on E-Day to pick up your “Ask me about PPAs” button! 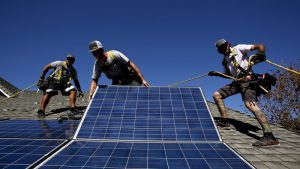