Join us at the State Capitol on Tuesday, along with over 20 environmental groups and advocates from across the state at this year’s E-Day! Go here for the Facebook event.

We will gather in the upper Rotunda on the Senate side from 9AM – 2PM. Come out and lobby your legislators on important legislation that impacting our drinking water, state forests, public lands, air, elections, and economy.

At noon we will rally in front of the Senate Chambers, joined by activist Tracy Danzey. Tracy was born and raised in the Mid-Ohio Valley of West Virginia during the height of a well-known industrial poisoning there. She now suffers with a dysfunctional thyroid and has undergone the amputation of her right hip and leg secondary to osteosarcoma. Her experience as a victim of unregulated industry in her home state, coupled with her commitment to her profession as a nurse, has left her uniquely poised to advocate for her fellow West Virginian and their absolute right to transparency in state and local economic development decisions, as well as increased industrial regulation, inspections,and standards.

Tracy will be coming down from the Eastern Panhandle where she is a community leader in the fight to stop the industrialization of her beloved Jefferson County, which touts one of the state’s most consistently successful economies. She recently walked over 70 miles on forearm crutches across Denmark in protest of the Danish insulation company who seeks to be the first to industrialize the area.

Be sure to stop by the WVEC table for a list of our legislative priorities and more information!

Then come out to the GREEN Jam at the Empty Glass on Elizabeth Street, just a couple of blocks from the Capitol. There will be music and food with no cover. Suggestion donation of $10 goes to support the WVEC. 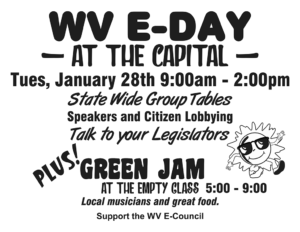