Interim meetings began at the Legislature in April. Along with Interims, a special session was called by Governor Justice. The special session call included 17 bills to consider. Some of the bills had been vetoed by Justice for technical reasons, some bills didn’t make it through the 2022 regular session. There was one new piece of legislation.

SB 2001 creates a revolving loan fund managed by the state Economic Development Authority to fund loans for business and industrial development projects. Funds will come from $600 million appropriated to the Department of Economic Development in the fiscal year 2023 general revenue budget from end-of-year surplus collections.

There were several bills we were disappointed to not see on the agenda, such as legislation to address the Office of Oil and Gas (OOG) inspector shortage. SB 480 and SB 613 both failed during session, leaving the OOG still at 9 inspectors state wide. We are going to continue our advocacy efforts on this issue, as more inspectors are needed to protect the health of our communities and environment in WV.

Aside from the special session, there was a Joint Natural Gas Development and Energy Committee Meeting on Tuesday evening. The purpose of the meeting was to address domestic and foreign energy markets with emphasis on exporting West Virginia energy to Europe. Presentations were made by the WV Coal Association, Gas and Oil Association of West Virginia and the Metallurgical Coal Producers Association. Overall, the message was that West Virginia has a once-in-a-lifetime opportunity to meet the current spike in demand for energy production that the war in Ukraine is causing. While we understand the importance of energy independence, ramping up production of fossil fuels to meet the immediate demand is not the solution. As the climate crisis continues, now is the time to reduce our reliance on fossil fuels and instead invest in a clean energy economy.

The next interims are May 22 – 24 in Morgantown. We will keep you posted! 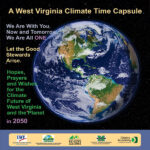