This week, ReImagine Appalachia released a study that finds that West Virginia will gain 41,100 new family-wage jobs if the federal government makes the smart, efficient investments needed to bring our nation’s infrastructure into the 21st Century.

You can read a briefing of the report here and watch the livestream of the announcement on Facebook here.

The study, written by the Political Economy Research Institute (PERI), breaks down how many good-paying jobs West Virginia stands to gain from investments in needed Mountain State infrastructure projects such as energy efficiency, expanded access to broadband internet, and repairing land damaged by past development.

But these jobs can’t become a reality unless our elected leaders choose to fight for them in Congress. 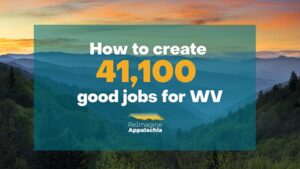 Two Bills to Support This Week

E-Day Just Around the Corner – Are You Registered?