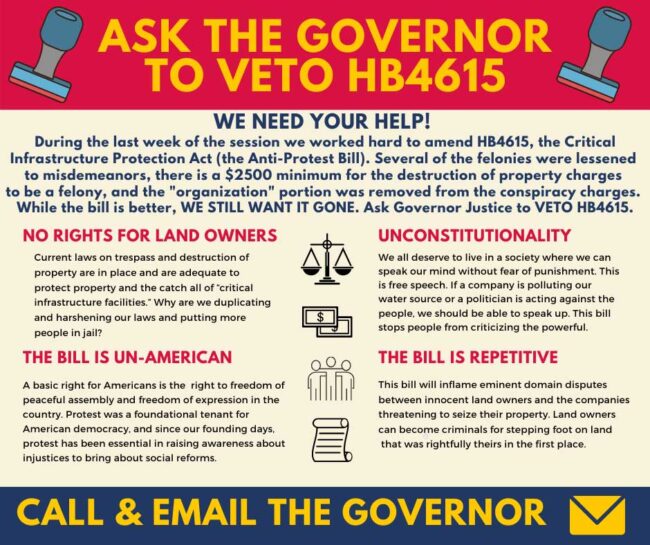 House Bill 4615, the anti-protest bill being touted as “criminal infrastructure protection,” is intended to intimidate and silence environmentalists. It hands industry even more power, with no regard for our people. Further criminalizing actions that are already illegal is unnecessary and will further crowd our jails and prisons.

The bill passed on the final night of session. We worked to have the bill amended substantially

The bill disproportionately affects land owners where a pipeline right of way has been placed on their land. In this instance, the land owner still OWNS the land, while the corporation LEASES, yet the landowner is guilty of trespassing. For example, Becky Crabtree was arrested for protesting a pipeline on her family farm. Under this bill, the penalties would have been much harsher.

First of all, THANK the senators that worked hard to amend the bill. Specifically thank Senators Trump, Weld, and Lindsay. Their work made the bill less bad in many ways.

Second, Reach out to the Governor…often! Urge Governor Justice to VETO this bill!! Click here to contact the Governor.

The good, the bad, and the ugly…

We Couldn’t Do It Without You

Thank you from your lobby team!
Frontier Theme
Send this to a friend