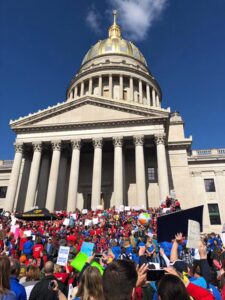 by the Ohio Valley Environmental Coalition

The fight for justice has never been won at the ballot box alone. Resistance against the status quo is not uncommon in Appalachia; from the Mine Wars to the Red for Ed strikes, West Virginia has been center stage in pivotal regional events. Bleak and seemingly-unwinnable battles are not unique to this state or its history. Rather, they are the norm. Resistance moving forward means learning from our collective past. It means strategically building coalitions and supporting our allies. It means finding leverage and applying pressure directly. It means seeing ‘unwinnable demands’ as unifying rallying cries for the majority people.

It’s easy to become despondent after an election. In West Virginia, we’re conditioned to feel that sense of disappointment regardless of the outcome. Fatalistic attitudes color our thinking, perpetuating the notion that nothing will ever change. In the 2020 election only 57.6 percent of eligible West Virginia voters cast a ballot, up a scant half a percent from 2016. Of all states within Appalachia, West Virginia’s turnout was the lowest this year.

One may point fingers and proclaim that the fault lies with voters or with politicians. Had voters been energized to get out and cast their ballots then they would have done so, some argue. But, because voter turnout remains so low, politicians have no incentive to make or carry out bold promises. The cycle feeds itself until everyday citizens become defeated, opting to accept their fate and the despair of futility.

Yet within this despair lies a precedent for hope. In West Virginia, that hope is found in the history of resistance this state and our people have to offer. From the Mine Wars to the Red for Ed strikes, West Virginians have never allowed their fates to be dictated by the wealthy, the powerful, or the political class. Those events are symbolic of the two sides of Appalachian identity—creating inspirational movements that challenge authority directly, and retreating when the system isn’t struck down. Following the Mine Wars, for example, a wave of anti-union repression took hold in the coal-rich southern counties, and it was more than another decade until union density among coal miners would peak yet again following the election of FDR. Similarly, the victory of the 55 Strong movement failed to force Republicans’ hands into accepting a long-term solution to PEIA, but they won increased pay for all public employees and stand organized and ready to defend PEIA in the coming years.

Resistance doesn’t have to come through the ballot alone. Resistance of authority is the lifeblood of the Mountain State. Rather than heap ash upon our faces post-election, we must remember our history of successful resistance against the odds.

The next two years will be tough, there’s no denying that. On the chopping block are a host of environmental regulations that our lawmakers are all too eager to roll back. ALEC-sponsored bills will undoubtedly make it to committees where they’ll be rubber stamped for quick approval on the floor. But as with all progress made in our state’s history, nothing will change unless we learn from those who came before us, nothing will change unless we organize. History shows we know how to do that.

Organize to build power: Please be certain you are subscribed to WV Environmental Council and OVEC action alerts, and the  action alerts from allied groups.

Read more from History of Resistance on OVEC’s blog. ‎

What Now?’ — Climate Solutions in 2021, and Securing a Just Transition for West Virginia

Shining a Light on Solar

Building a Resilient Food and Agriculture System in the Mountain State

Keeping the DEP Accountable in the Eastern Panhandle

A History of Resistance
Frontier Theme
Send this to a friend