The 2021 Legislative Session has come to a close, and we worked hard throughout the last 60 days to stop the bad bills and help get the good ones through. We had some great wins, and some not-so-great losses.

Due to the COVID-19 pandemic, the Capitol was not open to the public during the session, and lobbyists had to make appointments to get in. This information seemed to change weekly, but there was a lot of uncertainty about the restrictions and the risks of being around many others inside. This made everyone’s job a little bit harder, but we still did our best to communicate with lawmakers and stakeholders virtually.

In the final week of session, we made our in-person debut to the Capitol, along with Angie Rosser from WV Rivers Coalition and Karan Ireland from the Sierra Club (and former WVEC lobby team coordinator), to encourage Senators to vote no on the most contentious bill we were following: the Aboveground Storage Tank bill (HB 2598). We believe this was very effective, along with everyone’s calls and emails, as the tank bill never made it out of the Senate Judiciary Committee.

Read below for the other bills we followed during the session! 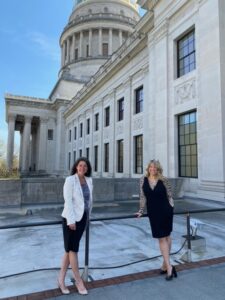 Our biggest win this session was helping put a stop to the dangerous tank bill that would have exempted oil and gas tanks from regular inspection under the Aboveground Storage Tank Act. The tanks that were going to be exempted on this bill were located in Zones of Critical Concern, which is only 5 hours or less upstream of drinking water intakes. We made a trip to the Capitol during the last week of session to meet with Senators and urge them to vote no on the bill. It was placed on the agenda, then got taken off and never made its way back on. This is a huge win for water quality, as this would have posed a threat with tanks potentially leaking toxic pollutants directly into our water supplies. Although we are happy that it is defeated this session, we fear that it will make its way back during the next legislative session. We will work in the off season to make sure we can keep these tanks under strict inspection.

A HUGE thank you for contacting your legislators and urging them to oppose this bill. Your phone calls and emails worked and we could not have done this without you! Also, a big thank you to those who also participated in our People’s Public Hearing back in March to speak out against HB 2598.

The water quality standards rule was passed, unfortunately, and signed into law by Governor Justice. Eleven of the 24 human health criteria values become less stringent under this new rule. Despite thorough research and many conversations with lawmakers, we couldn’t break through with enough legislators. The DEP voiced its support, despite water quality standards becoming less stringent, so this also weakened our arguments. Lawmakers decided to “follow the science” on this one, as it catered to polluting industries who were part of the stakeholder discussions.

Unfortunately, only one of the bills we were following that focused on funding the DEP Office of Oil and Gas passed. SB 404 provides for an application fee of $2,500 to modify an existing well work permit issued by the DEP’s Office of Oil and Gas. This is relatively minimal, as it is only a one-time fee expected to bring in $500,000 annually. We are still very concerned about the lack of funding this office is facing, as they only have 11-12 inspectors, with around 75,000 active and abandoned wells to inspect, and a $1.3 million budget shortfall.

We are so excited that HB 3310, legalizing Power Purchase Agreements for on-site solar generation, passed both chambers and is awaiting the governor’s signature. This will allow for homeowners and businesses to go solar without hefty upfront costs, and will also allow for more energy efficient power to be utilized. Thank you to House Judiciary Chairman Capito for originating this bill in committee!

SB 492, the solar bonding bill, is now completed legislation waiting on the governor’s signature. This bill would establish a program for bonding to reclaim abandoned wind and solar generation facilities. In its original version, the WVEC did not support it, but a few amendments made the bill a bit better. It appears that the $150,000 minimum bond value was removed, and the facilities exempted went from less than .5 megawatt to 1 megawatt, reducing the amount of projects that would fall into this bond reclamation requirement.

HB 2667, the bill that creates a program for state buildings regarding energy efficiency, passed out of both chambers and is also on the governor’s desk to sign. This will allow for cost savings to taxpayers and will establish a program to reduce overall energy usage by 25% in state buildings – a win for taxpayers and a win for the environment! A big thanks to the sponsor, Delegate Clay Riley, for offering this bill and to Delegate Evan Hansen for being a huge proponent.

We closely watched SB 542 throughout the session and its introduced version was very worrisome, as it was requiring utilities to maintain a 90-day fuel supply for the remainder of the life of existing coal-fired plants, costing rate-payers millions. This was changed and taken down to a 30-day fuel supply (many utilities currently keep around a 25-day supply). It also makes legislative findings related to the coal industry and requires that public electric utilities provide advance notice of retirement, shutdown, or sale of electricity-generating units.

Delegate Ed Evans offered an amendment on the House floor that added language to establish the Coal Community Comeback Advisory Committee, which would focus on developing a plan and recommendations to revitalize West Virginia’s coal communities by addressing economic, workforce and other actions. This was adopted with a 49-48 vote, and went back over to the Senate. Unfortunately, the Senate refused to concur and asked the House to recede, which it did. The defeated amendment would have strengthened the bill by providing resources and opportunities to help coal communities improve economically. The majority of the House, however, only voted to help coal, not the people in the coalfields. We hope this initiative comes back next year and we can pass a Coal Community Comeback bill.

SB 565, a bill that would have restricted voter access, did not make it out of the House Judiciary committee as Chairman Capito stated that parts of it “need attention.” This bill would have eliminated the two most popular early voting days, the Friday and Saturday before Election Day, allowed county clerks and the Secretary of State to begin purging the voter rolls after citizens miss one election, and dismantled Automatic Voter Registration (AVR). 57 people were on the list to speak at the public hearing that was held on Monday, April 2, with one of our lobbyists participating in opposition. We are glad this bill has died!

SR 43, which was also adopted by both chambers, requests the construction of a licensed off-highway vehicle, semi-contiguous trail parallel to the Appalachian Hiking Trail on the western side. These are just resolutions, however they are concerning as they are attempts to gather support for our public lands and ecosystems to be destroyed and damaged by off-highway vehicles.

Recap of the 2021 Legislative Session