“In democratic countries, knowledge of how to combine is the mother of all other forms of knowledge; on its progress depends that of all the others.” Alexis de Tocqueville, Democracy in America, 1835.

In other words, the power of people coming together can overcome other powers, including the organized power of money. That has been seen over the past week at the State Capitol. Members of various lobby teams, including WVEC’s lobbyists Conni, Vickie, and Robb, have met with lawmakers and their staff and with each other to strategize about how to keep water quality protected. Organizers, including WVEC’s Outreach Coordinator Marium Bria, have been busy making calls, sending emails to their contacts, posting on Facebook pages, tweeting, and talking one on one with people to get them to take action. And most importantly, YOU have been out there calling your Senator, your Delegate, your friends, coming out to public hearings, packing committee meetings, standing in hallways with signs and even turning out in sub-zero weather to show the hypocrisy of members of the Legislature drinking wine while we worry about drinking water.

So my message to you this week is to keep it up. Even though it may seem that it’s not making a difference; that your one phone call to your Senator, who might not be on your side, isn’t changing his or her mind, do believe that collectively we make a difference. Do believe that unity can overcome money, just as de Tocqueville observed back in 1835.

The WVEC’s E-day, from my perspective, was a success. Even though we had to postpone the awards dinner that night due to the storm, the real storm was during the day when people gathered in the rotunda and told their stories about why environmental issues mattered to them. One by one, people came to the microphone and shared, sometimes while fighting back tears, what safe water, clean air, the preservation of our health, and the protection of our beloved mountains means to their families. I observed the energy in the room go up after each story. I could feel the power building.

If you were one of those who spoke, thank you so much. I know it’s sometimes hard to keep telling that story, to keep sharing so deeply and feel like you are not being heard. Please keep it up. If you were not there, you still have the opportunity. Send an email to your representative, not about any particular bill, but tell your story, from the heart, about why these issues matter to you. Go on the WVEC’s Facebook page and post your comments. Come up with creative ways to share. Get a group of your friends together and decide to show up where lawmakers are gathered and let them know your story. If you drive by and see some people gathered in the cold, park, get out and spontaneously join them. And while you do that, remember the other issues also. Remember the need for strong labor laws so workers feel safe in their workplace, remember the rights of women to make their own choices about their reproductive health, remember that poverty and access to health care for all people matters, and remember that your story is a part of our collective story and OUR story is a powerful tool for social change. As one political leader told me this week, we need a WV Spring where people rise up peacefully and their voices are heard. Let’s make it so! 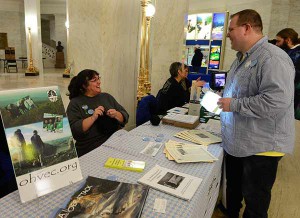