More than oil burned along the Kanawha River in Fayette County February 16. Public trust of government, which had risen after the aggressive actions to protect water following last year’s water crisis, may be going up in smoke, too.

That morning, just hours before the train derailment, dozens of West Virginians attended — and many spoke — at a legislative public hearing on drinking water protections for the Kanawha River. The irony of the two events occurring the same day should not be overlooked.

As our Legislature is considering ignoring solutions for backup water intakes, hiding information about threats to our water, and deregulating nearly all aboveground storage tanks, another dangerous chemical incident exposes the vulnerability of our water supplies and our own safety.

Fortunately, and remarkably, there were no fatalities in the CSX explosion. Still to be determined is the tally on property damage and impacts to the river and the life it supports. Against this backdrop, our Legislature is considering several measures that would make public water even more vulnerable.

Among these is a bill to amend the Aboveground Storage Tank Act, passed unanimously in the wake of the state’s 2014 water crisis. In its current form, only 90 of the roughly 50,000 registered tanks would still be subject to strict standards. Exclusions include, among others, all tanks used by the oil and gas industry. Even Freedom Industries would have been excluded from key requirements of the Act.

That bill restricts the sharing of critical information with water utilities and with the general public. And it removes the requirement to notify the public of chemical spills, releases, or related emergencies.

For many people forced from their homes after the CSX derailment, one of the most frightening aspects must understandably be that they have no information about what’s in the trains that pass their homes and schoolyards. When it comes to chemicals and fuels, the public has been shut out of the information chain. That same trend toward keeping information from the public is running at full throttle in the Legislature this session.

Another bill, HB 2333, would require utilities to involve the public in developing source water protection plans. It came about because in the battle over the Aboveground Storage Tank law last year, citizens demanded public involvement in source-water protection planning. It’s a good bill; but if it passes, its effectiveness relies on the public’s access to information.

Public information and public involvement go hand in hand. Public involvement can only be effective if people have access to information about the threats to their water — again pointing out the overwhelming demand for public disclosure about what is stored in aboveground storage tanks and what is transported through our communities.

It’s safe to say that we dodged a bullet in Fayette County. It’s a miracle no one died. We might have seen plumes of crude oil flowing downriver instead of a burning river bank. Still, the train derailment again points to the need for utilities to identify secondary water intakes.

A measure in the Legislature now would give the Kanawha River through Charleston “Category A” drinking water-use designation, meaning it could possibly be used as a source for public water. Having secondary intakes was one of the top recommendations coming out of the water crisis last year.

However, in another great irony, instead of following recommendations to provide Category A protections to the Kanawha River, some members of the Legislature suggest severely weakening these protections statewide. Instead of learning from tragedy to strengthen water protections, opportunists in industry and the Legislature are taking advantage of the chance to weaken them.

The waters of West Virginia belong to the people of West Virginia. The people’s government is granted regulatory authority of our waters as a matter of public convenience and, more importantly, a matter of public trust. The same trust is extended to public utilities that provide our drinking water — whether they are privately or municipally owned, they work for us. They manage the water that is ours.

How many catastrophes and near misses will it take until we, once and for all, commit to sound stewardship of the waters essential for life and prosperity? We can only hope the Elk River chemical leak and the CSX train derailment are the last messages we need to hear to better protect our water.

This article was printed as an op-ed in the Charleston Gazette on Friday, February 20.  Reprinted here by permission. 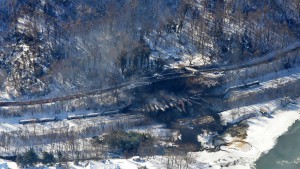