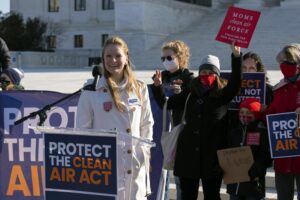 On February 28, the U.S. Supreme Court heard from coal companies and their partisan allies in the case WV v EPA, a lawsuit which aims to gut the Clean Air Act and limit the federal government’s ability to address climate change. I traveled to Washington, DC to join climate activists and participate in the Supreme Court Climate Rally Day of Activation Event. 225 advocates gathered to send a message that the EPA’s authority to regulate pollution under the Clean Air Act is a public health necessity and crucial in our fight against climate change. Several influential and prominent activists gave remarks and I had the personal privilege of opening the rally by singing a few songs, including Country Roads. West Virginia has a history of using music to inspire social change and it is always particularly special when music and activism collide.

Background on the Case

The main two questions disputed during the arguments were:

The major questions doctrine “requires that agencies have clear Congressional authorization on issues of such magnitude in order to promote democratic accountability, preserve the constitutional structure, and avoid entangling the judiciary in political questions.”

A ruling on this case is not expected until early summer, but it is important to keep advocating for the protection of the Clean Air Act and the EPA’s authority to regulate emissions. In West Virginia we know all too well the negative health and environmental impacts that come from putting polluters over people.

What you can do

SB 694 on Forced Unitization Is OK

Roof not good for solar? There’s another way…
Frontier Theme
Send this to a friend