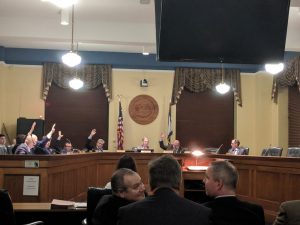 Senate Democrats fought twice in as many days to protect public lands in West Virginia. After public outcry killed a bill last year that would have allowed logging in state parks, we were wondering when we’d see bills this session that would be introduced that might have the same effects–or worse. Thankfully one of these, Senate Concurrent Resolution 21, is dead thanks to the efforts of the Democratic members of the Senate Government Organization committee.

The other, a bill that originated today in Senate Natural Resources, relating to off-road vehicle recreation and mapping of off-road areas, passed out of committee on a vote of 6-5 along party lines and heads to the full Senate for consideration.

SCR 21–urging Congress to open public lands–sought to allow motorized recreation in national forests, as well as increased logging. In an evening meeting of the Natural Resources committee, Senator Mike Woelful questioned a representative of the Commerce department who indicated that, while the Divisions of Natural Resources and Forestry were supportive of the resolution, she could not say the same for the Commerce department.

Speaking against the resolution, Woelful said, “…to the contrary, what we have to offer in our national forests is an area that is fairly unique to this part of the US, east of the Mississippi– logging and other activities within these pristine and remote areas is counter to tourism in our state.”

We will keep our eyes on the originating bill from Natural Resources to see the report is received today, Saturday.

A Victory for Public Lands- and Something to Worry About.

Bills on our watch

E-Day comments
Frontier Theme
Send this to a friend