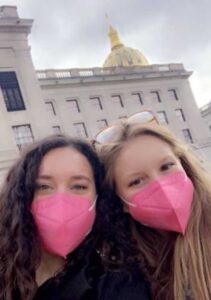 By Hannah King and Lucia Valentine

Our biggest accomplishment during the session was helping defeat HB 2598, the aboveground storage tank bill. This year’s bill would have relaxed inspection requirements on oil and gas tanks located within zones of critical concern, which are 5 hours or less upstream of our drinking water intakes. It would have gotten rid of the requirement that a certified professional engineer inspect and certify tanks, and would have changed the requirement of secondary containment inspections from 14 days to 30. The last week of session this bill was placed on the Senate Energy, Industry & Mining Committee agenda, and after lengthy discussion was tabled by Senator Eric Nelson. The Committee did not meet again. Thanks to all of your calls and emails, we were successfully able to kill this bill.

Another bill we helped defeat was HB 4553, a bill that aimed to exempt wholesale generators from zoning ordinances. While we support renewable energy and the idea of a proposed solar farm in Jefferson County, we felt it important to preserve local control so that no energy generator- coal, nuclear, wind or solar- could be exempt from local zoning. Without zoning safeguards, these generators could have been built in neighborhoods and communities. We were glad to see this bill die.

Another huge issue we focused on was securing funding for the WVDEP’s Office of Oil and Gas. Two bills were aimed at funding the Office: SB 480, which passed the Senate and died in House Finance, and SB 613, which died in Senate Finance. With over 70,000 wells and around 20,000 tanks in the state, our Office of Oil and Gas only has 9 inspectors. According to WVDEP Deputy Cabinet Secretary Scott Mandirola, most of the inspectors’ time is spent responding to complaints on new drilling sites. This is concerning as a study by Princeton University reported that of 79 wells within 13 counties, 53% were leaking methane. Methane is the second-worst greenhouse gas, can be harmful to human health, and the leaking of methane from wells gyps royalty owners because of the waste. Securing funding will be a huge priority for us again next year.

Despite a lot of outrage and calls from all of you, the Public Lands Privatization bill, HB 4408, passed within the final 30 minutes of the legislative session. There were a few amendments offered to the bill, however,in the final week to address some of the issues raised by the public. There was an amendment offered in the Senate Finance Committee by Senator Jeffries to require that a public hearing be held in the county of the park for any new development of a facility or establishment by a private company. This amendment will allow for greater public input. Another change reduced the contract period from 50 years to 40 years. The bill now prohibits the DNR director from leaving his position and going to work for a newly contracted company within the first year. Lastly the bill now requires any new contract to be approved by the Secretaries of the Department of Commerce, the Department of Tourism, and the Department of Economic Development. An amendment offered by Senator Woelfel on the Senate floor passed to exempt Watoga State Park from any new private development contracts. Our concern remains that the Tourism Department’s promises to maintain the integrity of our public lands were just assurances made in committee meetings, not anything amended into the bill. This leaves the worry that a new administration could have a different vision for our parks and for how private development is defined, with those who made the promises having moved on. More needs to be in writing to protect our parks and forests, especially from off-road vehicles, and that remains a major WVEC priority. Thanks to everyone who made calls and sent emails speaking out against this bill. Every Senator’s office we stepped into said they’ve been contacted several times on this bill!

SB 1, creating a mining mutual insurance company, passed on the second-to-last day of session after a session-long fight. While we do support and appreciate the effort by the legislature to address mineland reclamation, we had several concerns about this bill. SB1 creates an alternative bonding company to secure and prop up the most high-risk coal companies that can not otherwise get bonded through the private sector. In order to do this, the piece of legislation called for $50 million from the WV Department of Environmental Protection to finance the company. We now understand that the money will come  from the budget surplus, which ultimately means taxpayer dollars are footing the bill on reclamation costs. This presents an even greater economic and environmental risk for the state of West Virginia as these coal companies are the most likely to fail and forfeit their bonds. Additionally, any U.S. coal operator can seek coverage through this new entity, furthering the risk to West Virginia taxpayers.

At a public hearing on SB1 we urged that it be tabled and studied during the interim, with an emphasis on the findings and recommendations of the legislative audit report. More study is needed on how to best acknowledge and solve this issue and actually address the structural problem that led us to this point with the coal industry here in WV.

Other bills that passed:

There were a few bills that passed that created regulatory programs within the WVDEP, such as geothermal energy (HB4098) and carbon capture and sequestration (HB4491). A bill on advanced recycling (HB4084) was passed to establish the facilities as separate from solid waste authorities. They will still need to obtain respective permits from the WVDEP and abide by emission and pollution standards. While we have concerns about the emissions from these facilities and the further continuation/operation of the petrochemical industry, having alternate methods of plastic recycling could be beneficial. There was also legislation addressing rare earth minerals and elements (HB4003). Cramming the vetting of these broadly defined bills into a 60-day session meant limited vetting. It remains to be seen which companies were in mind as these bills were written and how carefully their future work will be regulated.

We fought hard against the water quality standards rule during interims and the session, but the rule ended up passing early in the session. It removes legislative review of site specific water quality changes and 5 pollutants become less stringent. We thank legislators who strongly opposed these new revisions and offered several amendments to try to protect our drinking water from these changes. Unfortunately these changes failed in both chambers.

Overall, we are satisfied with the bills we stopped and amended. It’s especially hard to fight for environmental protections in a state where even the Governor publicly admits that he doesn’t believe global warming is real as it hasn’t “been proven to him”, despite West Virginia facing brutal effects of climate change from flooding and worsening weather events.

Concerning us in particular this session is that many of this year’s new laws are tall on promises and short on guardrails for the environment, taxpayers, and ratepayers. 2022’s  overarching theme is the devil is in the details.

There is still a lot of work to be done, but this session helped give us the insight on where to focus our efforts in order to best effect change. Our state and its people deserve clean air to breathe, clean water to drink and an environment that is capable of sustaining life. We were proud to be a voice at the legislature this session representing all of you. The work continues!

Protect yourself from high energy bills