By Hannah King and Lucia Valentine

Bills we are watching

Last Action: Passed the House and referred to Senate Energy, Industry and Mining on 2/16/22

Summary: Please keep your calls coming on this bill. It awaits action in the Senate so calls to your Senators next week are key! Urge them to reject the tank bill again this year. We oppose this bill.

For more information, check out this updated fact sheet from WV Rivers Coalition. 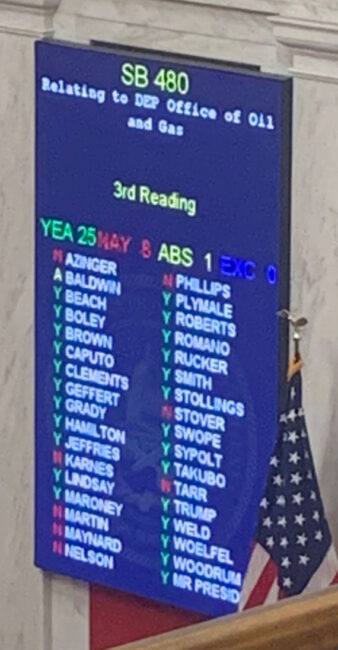 Summary: This bill establishes an annual oversight fee of $100 for wells producing more than 10,000 cubic feet of gas per day to increase the current number of 9 inspectors within the WVDEP’s Office of Oil and Gas (OOG) back to 20 inspectors. This bill states that it will “adequately fund the Office of Oil and Gas” but each inspector will likely still have 3,000-4,000 wells to oversee, which is still a large amount to regulate per inspector. We would like to see higher permit fees or monies allocated to fund even more inspectors and bring that number of wells down to a more reasonable amount, but we still commend the efforts to bring more funding to the OOG. We support this bill.

This bill was placed on the agenda in conjunction with SB 613, which would have  dedicated 1.5% of the oil and gas severance tax to the OOG, approximately an average of $3 million annually, though it can fluctuate dramatically. However, this approach requires redirecting existing revenue meeting other needs of the state to OOG.

Last Action: Passed out of Senate Energy, Industry and Mining and referred to Senate Finance on 2/24/22

Summary: This bill seeks to fund the Office of Oil and Gas by taking 1.5% of the oil and gas severance tax for the Office of Oil and Gas. This would generate approximately $3 million annually, which would help DEP address their inspector shortage. However, this approach requires redirecting existing revenue meeting other needs of the state to OOG. We support this bill because we support efforts to increase the funding of OOG in order to hire more inspectors to regulate wells. Call your Senators and ask that the bill be placed on the Senate Finance Committee on Monday.

Summary: This bill seeks to consolidate the health and safety facilities for all different energy sectors: coal, gas, wind, solar, hydrocarbon, oil and gas, etc., and move them under one office in order to more uniformly regulate each industry. This bill requests the office of Miners’ Health, Safety, and Training to study the feasibility of absorbing all of the health and safety facilities in the state during the joint interim session. Senator Smith cautioned that we didn’t want to unintentionally dilute this agency and spread their work thin. Senator Smith further stated that “there was a need for safety and we want to have protections for workers and industry.”

HB 4840 – Relating to the Office of Miners Health, Safety and Training.

Summary: This bill originated in the House Government Organization committee yesterday and converts the Office of Miners’ Health, Safety and Training to a compliance agency to assist mine operators. The bill essentially removes several civil penalties and fines from coal mine operators, which amounted to $900,000 in 2021 that went to the state. The bill also changes the requirements for inspectors to inspect and issue fines for coal mine operators, requiring them to make “recommendations” instead of orders. It cuts the requirement for training for underground miners from 6 months to 3 months, which is also very concerning. During the House Government Organization Committee, questions of counsel were cut short after the previous question was moved and ended all questions and discussions. No testimony was given from the United Mine Workers of America or the Coal Association and no amendments were able to be offered. Delegate Diserio, who is the Minority Chair for House Government Organization, submitted a report to recommend that HB 4840 be referred to the Judiciary Committee to further vet and debate the bill. The motion failed and the bill will be on First Reading in the House on Monday, February 28.

Last Action: Passed the House and is on second reading in the Senate on 2/28/2022

Summary: This bill establishes a new legal framework for which to operate class 6 underground injection wells in order to sequester carbon. The bill allows WVDEP to issue permits and regulate these underground injection sites and wells. The bill declares that sequestered carbon under permit isn’t pollution or a public nuisance. There were two amendments offered on the floor from Delegate Young, to clarify that Co2 is a greenhouse gas in code, and Delegate Hansen, to utilize other sources of funds other than the trust for liability. Both amendments failed but we greatly appreciate Delegates Young and Hansen for trying to make this bill better. While we support efforts to reduce that amount of CO2 in the atmosphere, we have many concerns about this bill. This is a complicated issue that can be extremely costly. We are concerned that relying on injecting carbon underground diverts the focus of transitioning away from fossil fuel energy sources to more carbon-free renewables.

Summary: This bill seeks to exempt wholesale generators from zoning ordinances. This would allow large scale energy projects to not have to follow local zoning codes. An exemption like this takes away protections in residential areas and has the power to change the landscape of communities. We’ve been working with a lot of folks to put a halt to this bill, which only made it out of the House Judiciary Committee by one vote last week. We oppose this bill.

Summary: We are concerned about this bill because of the toxic emissions that could be created from the incineration of multiple different plastics, as well as other pollution. We oppose this bill.

Sponsored By: Sen. Blair (Mr. President) and Baldwin [By Request of the Executive]

Summary: This bill would transfer the duties and responsibilities of the Solid Waste Management Board to the DEP, a solution looking for a problem and taking away local control while likely weakening Solid Waste Authorities. We have concerns that it also would allow mega landfills into West Virginia, something the WVEC has fought against for decades. Please call your senators and ask them to vote no on SB 554. We oppose this bill.

With crossover day approaching, we expect things to really start moving next week. Keep an eye out for action alerts! The session ends on Saturday, March 12 at midnight.

Stay tuned!  If you have any questions or concerns about any bills, please reach out to Hannah King (hking1275@gmail.com) or Lucia Valentine (luciavalentine10@gmail.com).

A Casino at Watoga State Park? NO! Act Now