Two Actions You Should Take Today!

The WV Legislature’s Rule-Making Review Committee will consider this rule change next week (Nov. 18 or 19). This is your chance to ask committee members to reject the proposed change.

The proposed revisions are drastic and equate to greater than a 13-fold and 46-fold increase over the current limits for acute and chronic aluminum toxicity to aquatic life respectively.

Citing only minimal scientific justification and flawed scientific analysis for these proposed changes, the rule changes as proposed fail to:

Here is how you can contact members of the Legislative Rule-Making Review Committee:

The WV Public Service Commission, which regulates this state’s solid waste landfills, is currently considering a request in Wetzel County that would allow unlimited amounts of shale gas drilling waste (drill cuttings and drilling mud) to be dumped in local landfills.

The Lackawanna Transport Company which operates the Wetzel County Landfill has filed an application with the PSC for a certificate of need to construct and operate a dedicated disposal cell for the disposal of solid drilling wastes.

Under memos recently issued by DEP to landfill operators (but not provided to county Solid Waste Authorities) there is ABSOLUTELY NO LIMIT on the total tonnage of drilling waste going into our landfills. And there is no requirement to monitor these wastes for radioactivity known to be associated with it.

The landfill tonnage caps contained in WV’s landmark Solid Waste Management Act were designed to insure that our landfills could operate well into the future. For more than a year now the PSC and the DEP have allowed the Wetzel landfill (and others) to exceed their legal tonnage limits to accept this drilling waste.

This is your chance to tell the Public Service Commission that this is not acceptable and that you want our landfills to be available for everyone’s grandchildren to use decades from now.

Once there, fill in all the name, address, phone information, etc. Under comment type — choose  “PROTEST”. The comment box will then display “Comment in Protest of Case 13-0832-SWF-CN”.

Here is a list of concerns you can use for your comments:

It is urgent that you do this now, because the comment period ends on Wednesday, November 13, 2013.

Thanks for your attention. 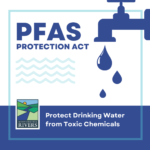