Right now on the House floor the utilities are holding their own bill hostage rather than allow third-party financing for solar energy in the form of power purchase agreements (PPAs) that would benefit our state’s residents, communities, and small businesses.

Including the PPA friendly amendments would not require the utilities to do anything they are not already required to do under current state law. It would just extend all West Virginians the same freedom to choose solar energy that the utilities are willing to give to large corporations.

Legislative leaders need to hear from YOU, the people of West Virginia, TODAY. Let them know that you support energy freedom for all West Virginians. Call House Speaker Roger Hanshaw at 304-340-3210 and Senate President Mitch Carmichael at 304-357-7801 and tell them to make S.B. 583 fair for everyone, not just utilities and large corporations, by including the PPA amendments. 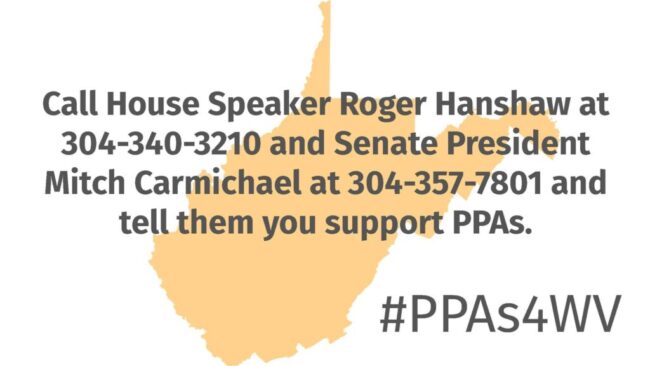 A Win! 4079 dies in House Committee
Frontier Theme
Send this to a friend