The biggest energy project you’ve never heard of commonly goes by the acronym ASTH—the Appalachian Storage and Trading Hub. This massive petrochemical hub in West Virginia and Pennsylvania would be the largest infrastructure in the region’s history, consisting of hundreds of miles of pipelines, fracked gas processing facilities, and underground storage of petrochemicals and fracked gas liquids.

Once completed, ASTH would stretch along the Ohio-West Virginia border from Pennsylvania to Kentucky along the Ohio River. Its powerful backers—including the Trump administration, the Chinese government, and Shell Oil—claim it will revitalize a region torn apart by a fizzling coal industry. President Trump and Xi Jinping, the president of China, met this past November on a trade mission, during which Xi Jinping signed on to invest nearly $84 billion in the ASTH over the next two decades—that’s more than West Virginia’s entire 2016 GDP.

More info on the ASTH from Ohio Valley Environmental Coalition. 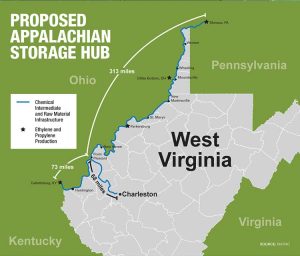