An EPA report has already been submitted to this committee, “Air Emissions form Scrap Tire Combustion” DEP-600/R-97-115, October 1997. The report has three parts. The first part addresses tire piles and tire fires. I believe we are all in agreement that tire piles and fires are a problem, so I will not address that part. The second part is emissions from a simulator, and the third part is a collection of emissions from actual facilities.

The simulator data is from a rotary kiln simulator, roughly 20 to 40 times smaller than full-scale units. Because of the differences in scaling, emission factors from the simulator cannot be directly extrapolated to full-scale units. Furthermore, there are significant differences between kilns and other combustion devices, such as boilers. The EPA simulator is a dual chamber incinerator with an afterburner, a state of the art unit. Tires contain 10 to 25% extender oils, which are much higher molecular weight chemicals and require more oxygen, higher temperatures, longer residence time, and more turbulence to burn than the actual rubber in the tires, so emissions benefit from the more efficient combustion efficiency provided by dual chambered units. According to Dr. Neil Carman, a former Texas Air Control Board investigator, the universe of standard boilers, furnaces, cement kilns, etc. are only single chambered combustion devices, not dual chambered units that allow for much improved combustion efficiency. (Carman 1998). Paul Lemieux, project manager for the EPA study, states that “In no way should it be inferred that the concentrations of pollutants from this apparatus would be the same as those from full-scale units” (Lemieux 1994).

The third part contains emission tests from 22 tire-burning facilities. Of those, four are power plants using only coal. One of those had no baseline data. When comparing results from the other three: particulates went down in two and in the third, up twice and down twice; Sulfur Di-oxide went down in one, up in the other two; and Nitrous Oxide went down in two, up in one. While these emissions generally went down, it is a mixed bag. These are the only emissions that all three facilities tested for. With the exception of one facility that tested for lead (up in three out of four), none of them tested for metals, dioxins, or most of the other non-criteria pollutants.

A Modesto, Calif. tire to energy plant that burns 100% tires is mentioned in the EPA report as indicating that a dedicated tires-to-energy facility can have emissions much lower than produced by existing solid-fuel-fired boilers. It should be noted that this facility is subject to California’s strict air pollution regulations and has three air pollution control devices.

The results from this facility in the EPA report shows that in a 1988 test, the plant produced .19 mg/day (.069 grams/yr) dioxins and furans. This rate, on a per ton of fuel basis, is approximately 11-15 times higher than the projected dioxin air emissions from the now defunct Apple Grove pulp mill project (Kotcon 1998). You may remember that dioxin emissions were one of the main concerns surrounding the Apple Grove project.

In a 1989 test at the same facility, dioxins and furans were emitted at the rate of .0236 grams/year (TEQ). This is one third the level reported in the 1988 test, but is equivalent to a lifetime maximum dose for more than 2 million people. (Environmental Research Foundation 1996)

Dioxins are recognized by the Environmental Protection Agency as the most potent man-made carcinogen. In its 1994 Reassessment on Dioxin, the EPA concluded there was no safe level of exposure to dioxin, and that exposure to dioxin at extremely low levels can cause a wide range of serious health effects including reproductive impairment, developmental injuries, and increased risk of diabetes.

Moving beyond the EPA test to other test results that I have found:

A test burn of 10% tires at a Kaiser cement kiln in California found increases in 11 of the 20 pollutants tested. Among the more noteworthy ones were a 603% increase in lead emissions, a 30% increase in dioxins, an 837% increase in hexavalent chromium, and increases in Nitrous oxides and particulate matter (Environmental Research Foundation 1996).

In his report “Domestic Markets for California’s Used and Waste Tires,” Seymour I. Schwartz, Professor of Environmental Science and Policy at the University of California at Davis reviewed test burns at four California cement kilns using waste tires as fuel He reported dioxins and furans increases of between 53% and 100% in four tests; polycyclic aromatic hydrocarbons (PAHs) increased in three tests (between 296% and 2,230%) but decreased by 68% in a fourth test; lead emissions increased in three tests, by 59%, 388%, and 475%, and decreased in one test by 94%; hexavalent chromium increased in one test by 727%, and decreased in two tests by 36% and 87% (Schwartz 1998)

Tire test burn results vary a lot, some pollutants go up in some tests, the same pollutants go down in others. If a general statement could be made, it would be that “conventionals” go down, and “exotics” go up. By conventionals, I mean the pollutants referred to by EPA as “criteria” which include carbon monoxide, nitrogen di-oxide, sulfur di-oxide, ozone, and particulate matter. The “exotics” are what EPA calls “non-criteria” which include 189 hazardous air pollutants (HAPs) of concern. These include volatile organics such as benzene, polycyclic aromatic hydrocarbons (PAHs) , metals, and several individual compounds such as dioxins and furans.

The criteria pollutants affect atmospheric pollution and aggravate respiratory problems, especially in the case of particulates, but it is among the non-criteria pollutants that you find the carcinogens, the teratogens (cause birth defects), the mutagens, and the chemicals that cause reproductive system damage.

Usually when people say that tires burn cleaner than coal, they are referring to test results involving the criteria pollutants. Indeed, many tests do not even test for the “non-criteria” pollutants. Dr. Neil Carman states that there is a tendency to skew stack test data in favor of burning tires as showing no statistical difference to showing that tires burn cleaner than coal, such as lower nitrous oxides. Professor Schwartz has a good discussion on the shortcomings of risk assessment procedures that concludes with this statement: “A statistical test using a flawed risk assessment model with highly variable (and suspect) emissions data provides absolutely no scientific basis for concluding that burning waste tires is safe.”

On that note, let me tell you about my visit to our own Office of Air Quality. I went to the office on a Freedom of Information Act request to view the data for the test burns that we have been hearing about.

Data from the 1995 Willow Island test burn showed that they only tested for NOx, SO2, CO, Particulates, TNCHC, O2, and CO2. Non criteria pollutants that have been shown to increase with the addition of tires, such as zinc, lead, dioxins and furans, and chromium were not even tested for. An OAQ statistical analysis shows there will be an increase in emission of over five tons per year, which would require a permit modification.

The Willow Island power plant data from the 1998 test burn was nowhere in the office. I was informed they would have to get another copy from the facility. It has not arrived yet.

The Grant Town power plant had three test burns, one of which was to last for three weeks, another for a month. The OAQ had data for two days. NO, SO2, 02 are the only pollutants tested for. There is no baseline data to compare these numbers with, and many of the results have question marks next to them indicating “questionable average.” Particulate matter and non-criteria pollutants were not tested.

Capitol Cement has not received their new tire burning equipment, and the test burn has been postponed until March. That means there will be no data from that facility before the session ends.

I also want to discuss the realities of burning, beyond test burn data. Test burns are generally considered a poor indicator of operation on a daily basis: during trial burns when regulatory authorization is at stake and government officials are present, variables such as waste feed, temperature, oxygen flow, and pollution control device efficiency are carefully maintained to optimize performance. On a day to day basis, there are upset conditions that result in considerably higher emissions. How well a facility maintains its pollution control equipment, operator error, fuel feed conditions, etc. all affect emissions.

It is interesting to note that during the Grant Town power plant test burn, when one would assume they were doing the best job that they could, there were citizen complaints about black residue on their houses, yards, laundry, cars, and complaints about odors. I have attached an account of citizen complaints from other tire burning facilities. I have also run across accounts of citizen groups fighting tire burners in California, Texas, Illinois, Ohio, and Pennsylvania.

All of this bantering back and forth with test data obscures some powerful common sense arguments concerning burning tires. Burning tires generates negligible additional jobs, it will probably cost the coal industry jobs. Burning tires competes with other, higher, uses for recycling tires that create more jobs. Legislation that stimulates real recycling markets for tires would encourage innovative processing technologies and entice new businesses to locate in West Virginia.

I have enclosed an excellent article concerning rubber asphalt that explains quite well that the barriers to rubberized asphalt are political and institutional, not technical. I have also enclosed a bill that would require the use of recycled tires in the construction and maintenance of roads and highways, and a transcript of a piece that Dateline NBC did on rubberized asphalt. 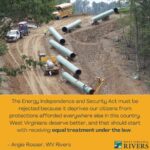