A new threat recently emerged for communities along the Ohio River.

Three barge docks are proposed to be built along the river to transport oil and gas waste from horizontal and vertical fracking operations. The projects, if approved, could result in the first barges carrying briny fracking wastes on the Ohio River.

The terminals would be developed by 4K Industrial Frac Water Supply and Recycling Technologies in Martins Ferry, DeepRock Disposal Solutions about 61 miles downstream at Marietta, and by Fountain Quail Energy Services about 38 miles downstream from Marietta in Meigs County, Ohio.

Based on current regulations, it is unclear what agencies would be tasked with responding to potential spills as a result of these new barging operations, and whether or not those agencies would be able to work together successfully to address the environmental and public health hazards associated with these pollutants.

Even worse, many public water treatment facilities are not equipped to filter out the contaminants if this conventional and unconventional oil and gas waste is spilled in the Ohio River. For example, some contaminants, such as radioactive chemicals in water, can only be removed using very specific techniques that are not currently utilized by most public water treatment facilities in our region.

In response to requests and comments from concerned citizens, the U.S. Army Corps of Engineers has scheduled a virtual public hearing on Friday, August 7, for the DeepRock barge dock near Marietta, Ohio. 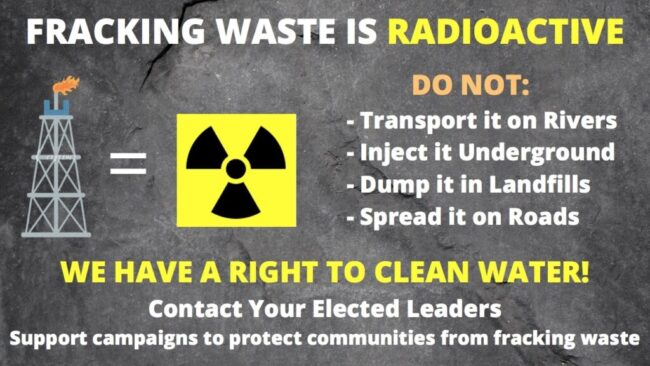 Is the EPA turning a blind eye to WVDEP?

Drinking Water Dilemma: Barging Oil and Gas Waste on the Ohio River
Frontier Theme
Send this to a friend