This is my third stint lobbying for the WVEC, and I’ve seen some pretty amazing things.  Some of them have happened this session, like the introduction of a bill that would’ve rescinded non-discrimination ordinances passed by several local governments in the state.

However, what I saw today takes the cake.

But before I tell the story I have to first give you a little background.

If you’re reading this, chances are you’re familiar with the concept of “clean elections,” in which political campaigns are funded by public money rather than by contributions from “special interests.”  Several states have passed “clean elections” laws, and we have an experimental program for clean election of Supreme Court justices right here in West Virginia.

The latter is largely thanks to a West Virginia clean elections advocacy group called Citizens for Clean elections.  The organization has two staffers, Julie Archer and Natalie Thompson.

Now back to my story.

The Senate Judiciary Committee was considering S.B. 541 which, if it passes, will greatly increase the amount of corporate spending allowed in WV elections.

The bill’s proponents contend that this will be helpful because it will reduce the influence of so-called “dark money:”  anonymous money contributed to organizations like the Koch Brothers’ “Americans for Prosperity,” which then route it to political candidates.

Representatives of a few groups were called to the podium to give their views on the bill:  someone from the office of the Secretary of State (see her perspective on the bill here); someone from the Republican party; and then Senator Herb Snyder kindly called Natalie Thompson to the stand to give the viewpoint of Citizens for Clean Elections.

Natalie told the committee that she thinks passage of this bill, and the resulting influx of corporate money into the political process, will result in an even lower level of citizen participation in politics than is currently the case.

Then Senator Robert Karnes (R-Upshur) began asking Natalie questions like “How is your organization funded?”  “Who are the member organizations?

When he was admonished by other committee members, Karnes replied to the effect that, “Well, we’re talking about dark money in politics, and she says she’s representing citizens, but their funding comes from left-wing organizations. . . “ (so “left-wingers” apparently aren’t citizens).

Excuse me?  Are my ears failing me?  Did he just try to make a connection between Natalie and Julie on the one hand, and “dark money” on the other?

If you know Natalie and Julie, you know that both are smart, capable individuals who surely would have no trouble finding other occupations with more lucrative salaries.  But they do this work for modest pay because they think it’s important.  Can you think of anything more noble, more patriotic, than advocating for a political system in which democracy is restored, so that we have government of, by and for “the people” rather than government of, by and for corporations?  I’m not sure that I can.

And the fact that we have now seen someone try to make a connection between “Citizens for Clean Elections” and “dark money” removes all doubt (if any remained) that we are officially down the rabbit hole.

Contact your senators.  Tell them to reject this horrible bill, which will begin being discussed again tomorrow (Tuesday) at 10:30 a.m., Room 208W.  You can listen live here. 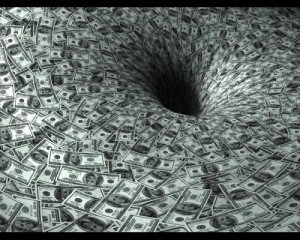