On January 9, 2014, a chemical (crude-MCHM) leaked into the Elk River, the sole drinking water source for Charleston and the surrounding area. Approximately 300,000 people were ordered to stop bathing in, cleaning with, or drinking the water coming out of their taps. Many became ill and visited emergency rooms.

January 9, 2014 was also the second day of the legislative session in West Virginia. The chemical leak was on lawmakers’ minds as legislators from all over the state were making Charleston their home for sixty days and taps were closed in hotels and in the Capitol itself. Very quickly, a bill was introduced that would regulate aboveground storage tanks, like the one at Freedom Industries that had just disrupted the lives of so many.

Specifically because of public engagement, that bill–SB 373– would pass as one of the strongest pieces of environmental legislation to ever come out of the West Virginia Legislature. Lawmakers could simply not ignore the voices of so many who showed up at committee meetings, who made office visits, who emailed and called.

Of course, that kind of involvement in the day-to-day at the Capitol is hard to keep up and, as the next legislative session rolled around, legislators and the industry lobbyists who were their biggest donors began the process of weakening the bill, eventually amending out most of the tanks regulated by SB 373.

One note of hope remained: during debate on another major rollback of the bill (HB 2811), (current) Speaker Roger Hanshaw (then, Judiciary vice-chair), assured the public, “Nothing inside a zone of critical concern is touched by this bill.”

Even Charlie Burd, executive director of the Independent Oil and Gas Association (now the Gas and Oil Association of WV) told reporters,  “It certainly does not reduce the level of regulation on tanks inside the zone of critical concern.”

The implication was that our most vulnerable water, those located closest to surface water intakes, would remain protected.

That makes the past two years’ attacks on Zones of Critical Concern (ZCCs) particularly shocking. Last year, HB 4079 attempted to amend out oil and gas tanks located in ZCCs, thereby wholly exempting an entire industry from regulation under this Act. Lawmakers brazenly introduced the bill on January 9, the sixth anniversary of the Elk River chemical leak.

People were outraged. Calls and emails to legislators poured in and the bill died the death it deserved.
But, here we are again. The same bill was introduced just yesterday as HB 2598. This year, the Capitol is barely accessible to the public, but there are still ways to take action. Reach out to the House Energy and Manufacturing Committee to respectfully demand they vote NO on this terrible bill and maybe, someday, it will be gone for good! 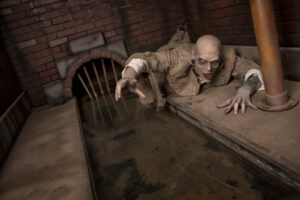 A Zombie in the Zones of Critical Concern